In Libya, which is customarily treated one-dimensionally as a case of sharp polarisation between the eastern and western parts of the country (a reductionism that is perhaps intentional on the part of some stakeholders), the south has reared its head as a bundle of threats with major security implications. These will inevitably work their way northwards with potentially destructive repercussions if the south remains ignored and if Libyans and their allies continue to lack the political resolve to incorporate that region in a concrete and integral way in the concept of the sovereign Libyan state.

Today, there are signs that Libyans can reach a genuine consensus that will offer a glimmer of hope. This development was preceded by an unprecedented comprehensive vision that includes a fair and equitable consideration of the south which has paid dearly for the decade of turmoil that has mostly unfolded in the north since the beginning of the Libyan crisis. This vision was framed in an initiative proposed by Aguila Saleh, speaker of the Libyan Parliament, although the Libyans sometimes refer to it as the “Egyptian initiative”. However, the challenges remain formidable and it will take serious and concerted efforts to overcome them and ensure that the south does not become a hole that drains all progress achieved.

Armed militias and terrorist organisations remain the most serious challenge in the south and among them the Islamic State (IS) group is the gravest threat. The terrorist organisation has been in Libya for years. After shifting locations for a while, it attempted to set up a base in the strategic city of Sirte near the petroleum crescent. After its defeat in Sirte, it turned southwards to the Fezzan region, out of range from much of the turmoil in the north, and there its members hooked up with assorted militias and smuggling gangs.

IS operatives now range virtually unimpeded across much of Fezzan, a far flung region (roughly 220 square miles) inhabited by less than half a million people. If that sparse expanse is an additional security headache, it is a great advantage for armed groups. It should be added that the south contains strategic arteries that supply both oil and water to both the eastern and western regions in the north. This could become a major source of political and economic pressure should these arteries come under threat from outlaw militia groups regardless of their affiliation and aims.

According to Libyan sources in Fezzan and investigators for AFRICOM who have been tracking the movements of IS fighters after their flight from Sirte, IS has formed a “desert army” consisting of three brigades. Units from these brigades were responsible for the extensive assault against the Great Man-Made River in 2017, followed by the destruction a large number of electricity pylons over an area of about 100 square kilometres.

The brigades also frequently dispatch small contingents to carry out ambushes and raids as a means to maintain a high level of security tension, intimidate and wreak attrition on any formal national police or military entity, regardless of whether it is affiliated with the east, the west or the Libyan National Army. As this small IS army grew, it weaved its way into the weft and warp of the tribal, ethnic and factional disputes in the region. Trade and smuggling routes between the south and Libya’s Sub-Saharan neighbours have long been the object of local and cross border tribal and ethnic disputes in the vicinity of the long, porous and purely secured borders. Tensions in the region increased, frequently flaring into armed skirmishes, as rivalries intensified since the onset of the Libyan crisis.

Another major challenge stems from another demographic component, which involves the transborder tribal and ethnic affiliations of important segments of the southern Libyan population and the mounting tensions and conflicts along such divides since the collapse of the Libyan state which had sustained a controlling presence before the February Revolution of 2011.

Until that point, there was general respect for tribal agreements that granted the Touareg control over the passes between southern Libya and Niger and Toubou control over the passes between southern Libya and Chad and other portions of Niger. These agreements broke down in 2014, setting into motion a long chain of violent clashes between these two major ethnic components whose circles of influence and control stretch across vast tracts of the south, as well as over a significant amount of both legal and illegal trade. In addition, there are strong links, common interests and occasional division of labour between them and armed opposition factions and separatist movements opposed to the regimes in some of Libya’s southern neighbours.

During the early years of the Libyan crisis, those border regions and the passes in particular were monitored from a French base in Madama in northeast Niger near the borders with Libya and Chad. The area became a hub of convergence between local militants and newcomers from terrorist organisations that sought to take advantage of the abovementioned surge in anarchy and fluidity. In mid-2018, after at least 10 terrorist attacks against US forces in the vicinity between 2015 and 2017, AFRICOM also established a large and sophisticated base in Niger, north of Niamey.

From there, AFRICOM carries out comprehensive aerial monitoring missions, using MQ-9 Reaper unmanned aerial vehicles to track terrorist movements and fortifications with a particular focus on IS and its affiliates. US forces have also carried out several strikes against leaders or contingents of the IS desert army, which has helped contained its expansion inside Libya, reduced its ability to infiltrate across borders and hampered its communications with armed factions in Chad and Mali. Nevertheless, despite AFRICOM’s surveillance and patrols, IS operatives still have the ability, albeit somewhat restricted, to establish lines of communication with local elements that support it or share common interests, and conclude deals and arrangements that strengthen its influence and reinforce its capacities for expansion.

The challenges posed by southern Libya extend beyond the security questions, as grave as they are. Standards of living in the south testify to severe deficiencies and shortages in infrastructure and public services which compounds the challenges, especially given how terrorist groups feed off such deficiencies. The interweave of such factors create situations that become impossible to remedy without comprehensive strategies that include a major security component, of course, but not exclusively. In short, a new approach has to be brought to the question of southern Libya and that approach needs to be backed by a will of steel on the part of the Libyan people and their allies in neighbouring countries. 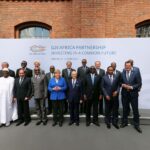 G20 Membership Justified: Africa and the Road to the G20