Egypt’s poverty rates declined by 3% for the first time in the past decade after a perpetual rise that was mainly driven by the global financial crunch and the economic and political instability since 2011. Other reasons that led to the skyrocketing of the poverty rates include the floatation of the pound and the coronavirus crisis that perpetuated fears of a return to high poverty rates.

According to Central Agency for Public Mobilization and Statistics (CAPMAS) data, before the outbreak of the pandemic Egypt launched a number of social protection programs along with the Economic Reform Program (ERP) it started in 2016, which enabled it to achieve positive outcomes that were reflected in economic growth, unemployment, and inflation rates and gave rise to a relative decline of extreme poverty in Egypt in 2019-2020, going down to the same rates recorded prior to 2013. This could be attributed to Egypt giving top priority to reducing poverty rates to ease the citizens’ burdens.

The previous figure shows a relative decline in poverty rates countrywide. In 2019-2020, poverty rates went down, recording 29.7 percent, up from 32.5 percent in 2017-2018. Before the outbreak of the coronavirus pandemic, Egypt targeted reducing poverty rates to 28 percent by end of 2021. However, given the close links between poverty rates and per capita GDP growth rate, unemployment rates, inflation rates, reaching the target poverty rates rate anticipated after implementing the ERP, i.e. a poverty rate of 25 percent by the end of the program might materialize later than scheduled.

Looking at the change in deep poverty rates during the period from 1999-2000 to 2019-2020, we find that they were marked by fluctuations between ups and downs subject to local and international crises starting from the global food crisis to the surge in prices following floating the exchange rate. Figure 2 shows the change in extreme poverty rates in Egypt over the period from 1999-2020.

Figure 3: Change in the average household annual net income in Egypt during the period from 2015 to 2019-2020 (in Egyptian pound)

Looking at household spending approach, we find that lower middle-income households spend 44 percent of their income on food and beverages, while upper middle-income households spend only 20.1 percent of their income on food and drinks. Overall, there is a positive correlation between the increase in household size and the average annual expenditure. Latest data from the CAPMAS indicate that the average annual spending of households in Egypt rose from EGP 26,200 in 2012-2013 to EGP 51,400 in 2017-2018.

Egypt is exerting vigorous efforts to reduce poverty rates and boost income and expenditure rates to improve the quality of life for citizens. Toward that end, the government developed a map system for poor population and their distribution country-wide to facilitate access to them. Villages, cities, and governorates that suffer poverty were identified. Upper Egypt governorates, particularly Assiut, Sohag, Luxor, Minya, and Qena topped the list of poverty rates among governorates.

In this vein, the government developed a strategy aimed at helping the neediest, focusing on implementation of social protection programs and ensuring that support subsidy reaches those who are entitled to it. According to thestatistics of the Ministry of Finance (MoF), 88.5 percent of Egyptian households benefit from the food subsidy program where the largest subsidy payments go. Figure 4 shows the state’s policy to support the neediest groups by allocating the largest proportion of subsidy to food commodities. 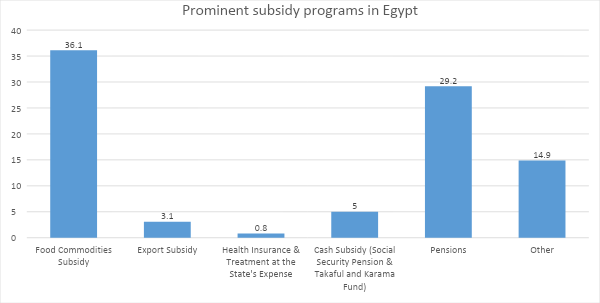 Further supporting the poor, the government launched Takaful and Karama [Solidarity and Dignity] program to protect the most vulnerable groups by providing them with conditional cash subsidy on a regular basis. The program aims at reducing poverty while allowing citizens the freedom to spend the subsidy as they wish, unlike the in-kind subsidy provided by the state.

Moreover, the state provided a monthly grant to irregular workers and support for small and medium enterprises, and launched numerous initiatives targeting enterprise owners to help provide job opportunities for citizens, which would bring unemployment rates down and generate income needed for spending, leading, overall, to a reduction in poverty rates and enhancement of citizens’ standard of living.

While the state has managed, for the first time in decades, to reduce poverty and extreme poverty rates, there appears to be concerns about poverty rates rising again given the new challenges the economy is facing in the wake of the pandemic. As such, the government has mobilized competent bodies to develop plans aimed at reducing repercussions of the crisis on citizens, particularly the poor and increased subsidy allocations directed to poor families. Hopes are that these efforts would bring poverty rates down to the target rates of the ERP, or at least close to them.