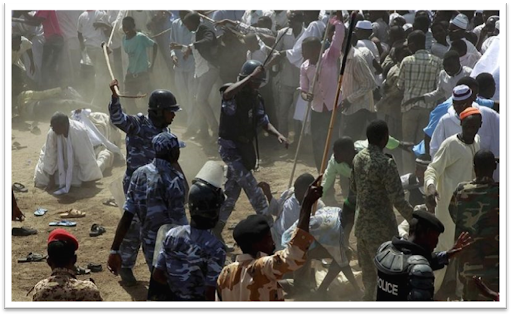 Tribal clashes in the Sudanese Blue Nile state have intensified in recent days, aggravating the violence that has marred the country over the past months, which threatens Sudan’s security and stability and undermines peace efforts that the Juba Agreement for Peace in Sudan (JAPS) called for.

Clashes between the Berti and Hausa tribes brought about an increase in the deaths and casualties and resulted in the displacement of thousands of people, which raises concerns about the spillover of violence, amid condemnations of inaction from the authorities to preemptively contain tensions, with the growing indicators of violence and hostile rhetoric at an earlier time.

This raised questions about the drivers and motives of these events, the context and different factors associated with them, and the response and stances of the different actors.

A Long Series of Violence

The recent skirmishes took place between the Berti and the Hausa tribes in areas of Qeissan, Ar-Roseires, Bakouri, Umm Darfa, and Quneis, where 16 stores were burnt, over 31 people were killed, more than 150 were injured, and 15,000 others were displaced. Representative of Ar-Roseires Resistance Committees, Hassan Al-Aqib, revealed the displacement of 200,000 citizens from their villages to neighboring areas due to the clashes in the state. These figures were confirmed by a member of the Damazine Resistance Committees, which prompted the local authorities to impose a curfew and close the roads leading to ar-Roseires and Damazine, the capital of the state, so that the authorities can restore security.

The Hausa’s request to create a community-based administration provoked the clashes between the Hausa and Berti tribes in the Qeissan area, which borders Ethiopia and is located 1,000 km southeast of Khartoum, and in ar-Roseires, located on the eastern bank of the Blue Nile and connected to Damazine by a bridge. The Berti tribe turned the Hausa’s request down, on the grounds that a community-based administration can be only granted to owners of the land and the Hausa aren’t.

According to the statement of the Malik Agar’s wing of the Sudan People’s Liberation Movement-North (SPLM-N [Agar]), i.e. the movement that signed the JAPS representing the Blue Nile after Abdelaziz Al-Hilu’s faction of the SPLM-N, active in Kordofan failed to sign it, these fights took place against the background of the Hausa organizing a conference in which a community leadership was chosen to manage the tribe’s affairs, which was rejected by the native administrations of the state. The state governor intervened to contain the tensions between the native administrations and the Hausa tribe, explaining that there had been a decision issued by the Federal Government providing for halting the approval of the community entities until the Conference on Governance and Management is held. In essence, the approval of any native administration is governed by the Native Administration Act, under the supervision of the Ministry of Federal Government and the local government administrations in regions and states.

In this vein, a new component under the name of “Descendants of the Funj Sultanate” (DFS) gained prominence. It held continuous meetings with the native administration in the Blue Nile and a conference was organized, where the DFS put forward a set of demands, part of which fuels racist mobilization and spreads hate rhetoric, among other crippling demands, such as the expulsion of an ethnic group, dispossession of their national identification number, and grabbing of their agricultural lands. The regional government rejected these demands, which was interpreted by some as demonstrating bias and aiming for political gains, according to the movement’s statement.

The SPLM’s statement accused the DFS of playing a negative role in inflaming the situation. The intervention of an armed movement not a signatory to the JAPS and allied with political leaders with different visions than those of the popular movement, led to the outbreak of violence. SPLM denied the accusations leveled at it of providing the Hausa tribe with weapons due to Agar’s desire to gain popular support, as his tribe, the Ingessana, which is known for being relatively small, has lost some of its members in the wars it fought previously.

Responses from active actors to this wave of violence varied widely, ranging between condemning violence, calling for a truce, restoring security, and imposing the prestige of the state. Below, we review some of these responses:

Following a meeting of the Security and Defense Committee headed by the Chairman of the Sovereign Council, Lieutenant-General Abdel Fattah Al-Burhan, the Sudanese Armed Forces announced instituting a Commission of Inquiry on the violent incidents in the Blue Nile that claimed dozens of lives. The Technical Committee of the Security and Defense Council in Sudan decided to promote build-up of the security forces in the Blue Nile. The Committee announced dispatching troop reinforcements from the regular forces of Khartoum to help prevent ethnic and racial polarization in the region and end the armed tribal conflict. Further, the authorities deployed the Rapid Support Forces to stabilize the area, imposed a night curfew, and banned gatherings in the towns of Ar-Roseires and Damazine, where the clashes took place.

Moreover, the Governor of the Blue Nile Region Ahmad Al-Omda, ordered curfew and banned processions in the region for one month. While the authorities dispatched forces to control the security situation, these procedures were insufficient. Local administrator for Ar-Roseires, Adel Al-Aqar, requested deploying additional forces to put the security situation under control, calling on wise men to talk to the population for pacification, pointing out that citizens resorted to the police station to seeking protection.

In the same vein, the United Nations Special Representative in Sudan, Volker Britts, called for “concrete action towards peaceful coexistence”, advocating for “a cessation of retaliation”. The Sudanese Doctors’ Central Committee also called on the Federal Ministry of Health to “act urgently to open an air bridge with the state, towards meeting the work requirements and evacuating patients in need of advanced treatment services.” Member of the Sovereignty Council of Sudan (SCS), Malik Agar, urged the UN agencies to provide urgent humanitarian aid to the increasing numbers of people affected by the ongoing conflict, noting that the current capabilities in Blue Nile state are insufficient to avert impacts of the conflict.

For his part, Wagdi Saleh, spokesperson for the Central Council of the Forces of Freedom and Change and head of the legal committee, stated that, “the ongoing clashes in the Blue Nile are planned to provoke unrest and strife and threaten public security.”, adding that “there are political forces, including political Islam groups and coup forces, that want to grant the security of the Sudanese people in return for abandoning the democratic transition”, demanding de-politicization of the tribal clashes, otherwise Sudan will pay the price for these conflicts that will spill over into other parts of the country. Relatedly, member of the Freedom and Change Alliance, Beshri Al-Saem, said that the clashes that broke out in different regions were motivated by attempts of tribes and armed elements to impose their control over the economic components.

Meanwhile, the Popular Congress Party blamed the exacerbation of the situation on the slow implementation of the JAPS and the sluggish political process. Moving forward with the procedures of the transitional phase and electing people’s representatives would help lay foundations of the federal rule and organize relations between community and tribal administrations in a way that improves the societal fabric, capitalizing on the cultural, ethnic, and racial diversity, towards directing all capacities to building the country away from the hostile rhetoric, hatred, and racism.

The leader of the National Umma Party, Mubarak al-Mahdi, described the conflicts between the Berti and Hausa tribes in the Blue Nile as being deeply regrettable and prayed for those killed in the clashes. Al-Mahdi indicated that these clashes are the result of major defects of the JAPS and mistakes of the transitional period, where a member of an armed movement was appointed without a legislative basis, and he went on to change the historical civil administrative structure to build his voter base. He also called for imposing a state of emergency and a curfew in the Blue Nile to end the bloodshed, relieving the governor of their command, and appointing a governor from the administration officers.

At the grassroots level, some members of the Hausa tribe organized marches in Al-Qadarif while others closed the road between Al-Qadarif and Khartoum, denouncing what happened to their tribe. In this respect, the Hausa spokesman, Harun At-Taher, called on the SCS to quickly punish the perpetrators and retaliate for the martyrs, so that such acts would not lead to a deterioration of the security situation in the country. Further, groups of the Hausa tribe set up barriers in several streets of Kassala, along with calls for a sit-in in solidarity with the Hausa tribe in the Blue Nile. The protesters also closed the Al-Gash Bridge in Kassala, which connects Al-Qadarif to other states.

The Hausa people formed a High Central Committee (HCC) to manage the Blue Nile crisis. During the HCC meeting with the head of the SCS, HCC members demanded the following:

In effect, after signing the JAPS between the transitional government and the armed movements in 2020, acts of sporadic violence spread in several parts of Sudan, including the eastern coastal areas and West Darfur. Overall, tribal violence in Sudan is a renewed problem that needs radical solutions rather than temporary measures. Controlling unrest and preventing its recurrence can’t be possible without addressing its core causes, building consensus under which all parties commit not to resort to violence and agree on specific mechanisms through which they resolve problems in peaceful and non-violent ways, including effective mechanisms that ensure tribal tensions are not employed in the political conflicts in the country, while developing a national action plan to protect civilians and ensure the rule of law.

In short, the high number of deaths and casualties raises fears of the expansion of violence in the Blue Nile state that has historically suffered from tribal violence, along with the states of Kordofan and Darfur. Fears of the spread of violence in Sudan are not only based on the clashes in the Blue Nile and their increased victims, but by all the factors surrounding the social peace situation in Sudan, particularly with the faltering peacebuilding efforts, the deteriorating economic conditions, the widespread societal division, and the stalled political process. Combined, these factors hamper enforcement of the JAPS as well other security arrangements, supposed to serve as a step in addressing past grievances, towards achieving development within the framework of a new political process during the transitional period.

Large-Scale Reverberations: The Ukraine War and the Freight Industry