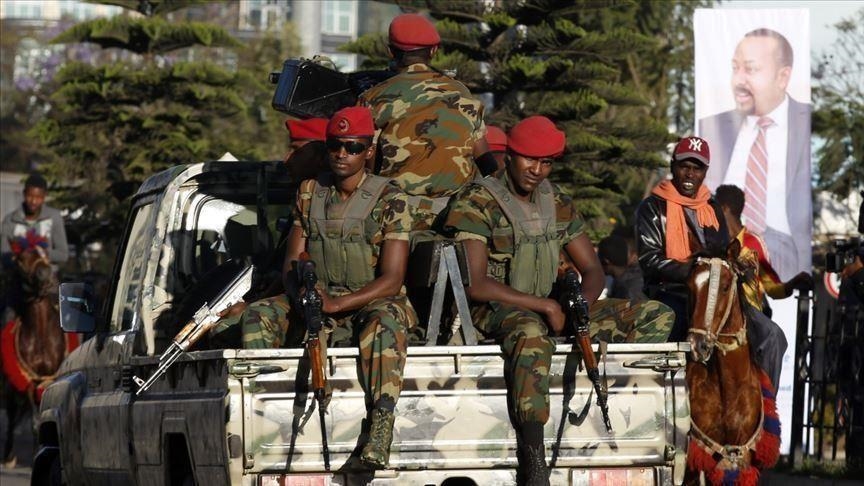 At headquarters of the Prosperity Party last Monday, Ethiopian Prime Minister Abiy Ahmed chaired an executive meeting that brought together pillars of his regime including the Defence minister, Abraham Pillay, who came out of the meeting telling the press that from the following day (Tuesday), military and security forces would start to apply special measures and tactics to cope with the “difficult situation”, as he puts it. Pillay’s statement came hours after Abiy Ahmed’s flabbergasting statement to residents of Addis Ababa saying, “let’s meet at the battlefront.”, without making it clear where the battle begins and which front he means.

The West, that has constantly paid lip service to the Ethiopian model and burnished Abiy Ahmed so far as to award him the Nobel Peace Prize, is now accused of allying against Ethiopia and Abiy’s government is declaring its refusal of intervention of the international community. In the course of the war on Tigray, this same government changed the characterization of the conflict from a “law enforcement operation” to an “existential war” which necessitated, at critical moments, calling on all citizens capable of bearing arms to join the fight to preserve the entity of the Ethiopian state. Awol Allo, the eminent lecturer in law at Keele University who nominated Abiy Ahmed for the Nobel Prize, posted a tweet on Tuesday expressing his shock of Abiy Ahmed’s statement, describing it as being “so extraordinary and unprecedented, replete with languages of martyrdom and sacrifice, showing how desperate the situation is.”

These shifts are just one part of the picture. For his part, the US Special Envoy for the Horn of Africa, Jeffrey Feltman, is endeavoring to ameliorate the situation and rein it in to prevent further deterioration by focusing on negotiations towards reaching a peaceful political solution. Months ago, Feltman cited that the key desires of both parties [i.e. the Tigrayans and the Ethiopian government], which he intermediated, didn’t entail the exclusion of one at the expense of another. He confined demands of the Tigray People’s Liberation Front (TPLF) to ending the government blockade and allowing the flow of humanitarian aid into the region to salvage more than 400,000 starving people versus Abiy Ahmed’s desire to have the TPLF withdraw from the lands they seized. However, Feltman overlooked the fact that both parties had tactical and strategic goals that weren’t secret during negotiations and remained capable of undermining all efforts aimed at reaching a peace agreement. While Abiy Ahmed was aspiring to notch up a military victory that would reassert his legitimacy, TPLF leaders were pressing for Abiy Ahmed’s departure, refusing to accept the outcomes of the elections that, for them, gave Abiy a sweeping hollow victory. Over the past few months, Feltman and his team kept an eye on the situation, weighing up the balance of power between the two parties. Perhaps they experienced some relief after the Ethiopian army and some pro-local militias managed to curb the TPLF that got involved in a furious fight to cut off the road between Addis Ababa and Djibouti. Nevertheless, the TPLF didn’t fail to find a more threatening way that took the conflict to this perilous situation at the ramparts of Addis Ababa.

Over these long months of wait-and-see and in the course of the battle to the capital road leading to the coast, intelligence elements of the TPLF managed to achieve a significant breakthrough by entering into alliance with several Oromo factions, the ethnic group from which Abiy originated and which the Capital falls within their territory. The Oromos accuse Abiy Ahmed of playing games with them and encroaching upon their demands in favor of the Amhara. The Tigrayans-Oromos alliance enabled the TPLF to infiltrate into focal points on the southern road to the capital. Some local resources, that closely followed negotiations of the TPLF with community leaders that gave rise to Tigrayans’ pledges of securing the Oromos’ interests in the event of regaining power, see these negotiations as having provided an enabling environment that allowed the Tigray forces to tighten a firm grip on the northern roads leading to the capital. This development was declared in Feltman’s briefing on the ongoing situation in Ethiopia, stating, “For a while the lines were static, and then about a week ago, the TDF/TPLF started to move again.  And this alarms us.  It alarms us for several reasons.  It alarms us because more – the more that you have the military conflict expand, the more people are affected.  The closer that the TDF is able to move to Addis, its own demands”. In effect, Washington has remained staunchly opposed to the Tigrayan forces’ threat to the capital, by either cutting off the road to Djibouti or threatening Addis Ababa by entering it.

Stephane Dujarric, Spokesperson for the United Nations Secretary-General, told reporters in New York that a few hundred family members of international staff in Ethiopia are being evacuated. Yet the “staff will remain in Ethiopia to deliver on our mandates”, Dujarric added.  Germany, France, Turkey, and the United States, advised their citizens to leave Ethiopia without delay, realizing that reports suggesting the Tigrayans would respond to the negotiation process seemed more likely than what is reflected by the volatile field situation, which gives an edge to the Tigrayans’ appetite to repeat the 1991 scenario when the TPLF under Meles Zenawi stormed Addis Ababa toppling Mengistu Haile Mariam’s rule. Today, Abiy Ahmed seems exactly in a similar position as Haile Mariam, with spectacles of fall surrounding him and his capital from all sides, particularly after nine armed movements announced striking up an alliance. While the TPLF is the largest of these allied movements, the Oromos, Afars, and Somalis joining the alliance and coming together with the aim of overthrowing the regime of Abiy Ahmed will give rise to only one scenario, i.e. storming Addis Ababa or Abiy Ahmed’s escape to a safe haven in one of the neighboring countries as a last resort to escape murder at the hands of armed factions that vowed to kill him.

The end scenes remain open to several scenarios, mostly portending further bloodshed. Recent developments on the ground drained capabilities of the Ethiopian army and left it facing an inevitable dilemma, i.e. the need to fight till the end, pushing the Prime Minister and the army towards escalation with no room for negotiation. The TPLF proposes a new foundation phase following the overthrow of the current government, undertaking to bring its figures to trial on war crimes charges committed in Tigray as well as other theaters of war to please government’s allies who share the same implacable hostility to the Tigrayans. The specter of disintegration remains a more likely scenario given the demands of several ethnicities, along with the Tigrayans, of more autonomy or secession, which the Constitution provides for, a time-bomb pending explosion subject to the final say of the victorious group that will inevitably tamper with it.

*The Arabic version of this article was published on November 27.